in my previous post I wrote about how easy it is to add the tSQLt unit test framework to your database if it is running in a docker container.

So as per usual – open up SQLTest and choose the database that you want to add the tSQLt framework (that is encapsulated in SQLTest) to;

You will be presented with this screen – I generally take off the tick for SQL Cop and add those tests later.. 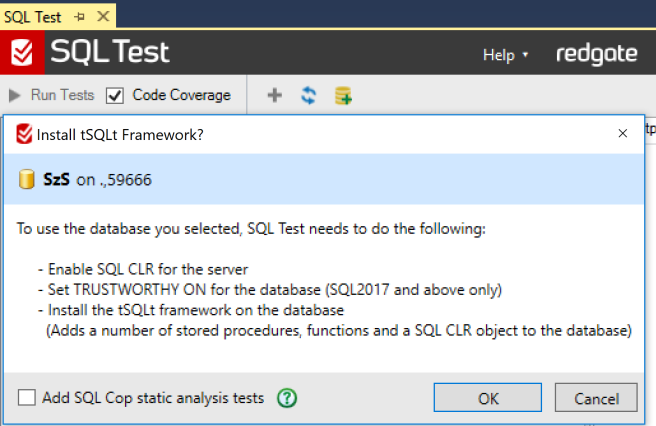 Unfortunately we get an error:

Basically we need to add tSQLt manually and edit some things to make it work with SQL Server running in a docker container:

1. First we need to ensure set both clr enabled and clr strict security to enabled:

2. We can then either grab the script manually that SQLTest is using or manually download the tSQLt framework from http://tsqlt.org/download/tsqlt/

We will use the tSQLt.Class.sql script and basically search for:

and change it to

We can now either add our database to SQLTest as per normal (in fact if we’ve done everything correctly the it will just appear) so just try and hit refresh and your database should be there.

There is now no reason at all that you should not be writing/running unit tests for your SQL code.

You can even do it against databases running in a docker container using SQLTest.

I always say unit tests are the thing that keep me employed – as all my buggy code (and there’s a lot) gets caught on my laptop (or container) and NOT in PROD or even UAT systems.

This blog post describes how to add the tSQLt unit testing framework to a database running in a docker container. You may have already read my article on how easy it is to install against a ‘normal’ SQL Server instance – running on windows…

..but what about SQL Server running in a docker container??

I have a SQL Server instance running in a docker container as described in my previous post:

Setting up CentOS to run docker for SQL Server

The main reason why I run SQL Server in a container is so that I can run up specific versions – all from a script and generally as part of an automated build within Continuous Integration processes.

The first thing we need to do is spin up our docker container which has our SQL Server instance:

Just to verify that it is running let’s run

We can now connect to SQL Server on port 59666 and do some typical queries whenever we connect to an instance for the first time:

Note that in the screenshot above – the servername result is the name of our container.

Now we can create our database and SQL Authenticated users as normal.

Yes – you interpreted that sentence correctly – right now you cannot use windows authenticated users against SQL Server running in a docker container on Linux. There is a way to get around this that I will be blogging about in late January 2019.

We can add our database to Source Control as per normal and apply the latest changes in our branch. I use the popular Redgate tooling for Source Control (and DevOps) activities

So all that is left to do is download the tSQLt framework (a whopping 86KB zip file)  from http://tsqlt.org/download/tsqlt/

Inside the zip file are some files:

Which is a script that allows you to create a database and run your first unit tests. It’s a great example and you can follow the documentation at https://tsqlt.org/user-guide/quick-start/

Which is a script to enable CLR. This is partly why you should only run tSQLt on your DEV or selected TEST databases.

This is where I diverge slightly from a stock standard install:

The SetClrEnabled script does the following:

Whereas for Linux based SQL Server we need to run this – as it will not install with clr strict security enabled – note we have to ‘show advanced options’ first:

This is the framework itself. Now before you run this you have to do the following to get it to run in a database running in a container:

We now run the script and voila – we have tSQLt in our database and can now write or run all the unit tests we want.

So there you have it – you can add tSQLt very easily (just 2 changes to make) to a database running in a docker container.

As mentioned the reason why I am very interested in running tests against databases running on container is around testing – I can spin up the container, download a particular patch level of SQL Server 2017 and above, add my database from source control, apply any referential data from source control and apply tSQLt which allows me to run a plethora of unit tests.

All within seconds and all consistently across multiple environment levels (QA, Integration, Functional test etc).

This blog post describes how easy it is to install the tSQLt framework.

Don’t know much about tSQLt? If you are serious about dealing with data in SQL Server then you should be as serious about unit testing the changes you are making to your stored procedures, functions and the like.

In fact I wrote a blog post about unit testing here:

Doing DevOps for your Database? You need to start here…

So I am assuming that you have realised how important it is to unit test your data and code so here’s how to install tSQLt to your database.

The direct URL is http://tsqlt.org/download/tsqlt/

You will get a zip file with some files in it:

Which is a script that allows you to create a database and run your first unit tests. It’s a great example and you can follow the documentation at https://tsqlt.org/user-guide/quick-start/

Which is a script to enable CLR. This is partly why you should only run tSQLt on your DEV or selected TEST databases.

This is the framework itself.

We now run the SetClrEnabled & tSQLt.Class scripts and voila – we have tSQLt in our database and can now write or run all the unit tests we want.

I guess at this stage you might ask – why do I need to enable CLR – well let’s say you don’t enable it and just run tSQLt.Class.sql – you will get the following error:

So yeah – enable CLR and then when you run the tSQLt.Class.sql script – things will go much better:

So now you can start writing your own tests. The tSQLt framework adheres to the three A’s of unit testing:

The tSQLt website has some great examples and tutorials and honestly – the learning curve is very small – I’d say most Data Professionals can be up and running unit tests within 1-2 hours.

In my opinion tSQLt is that sweet spot of easy to use and comprehensive enough to make a difference.

This blog post is about a situation where after windows patching the SQL Server service and SQL Server Agent services will not start automatically – but will manually.

At a client site they had recently patched the servers – things went swimmingly – except the SQL Server services would not start.

We tried a few things:

Increasing the service pipeline timeout from 30 seconds to 60 seconds

Looking at the event logs I (eventually) found this:

Which is bizarre – as the service account had been used for months – but after each reboot the services had to be manually started. GPO and other things had been blamed but no one could actually find out why.

Just for a laugh – I decided to “rename” the service account.

Rebooted and it worked.

Just to make sure it wasn’t a false positive I left the SQL Server Agent service how it was – and it did not start.

As to why this is the case – I’m not sure. To date I had always set up my SQL Server services with <domain>\<service account> so I have never stumbled across this – until now.

This blog post is about running SQL Server in a docker container on CentOS Linux distribution.

This was both an experiment and also for me to re-learn CentOS – years ago I had done a fair bit with CentOS – back when I was a true Operations Consultant. Up until last weekend I had been using Ubuntu – as it is really easy to use.

All SQL Server container images on docker are built on the Ubuntu image so I wondered – can I run it on a CentOS Linux server running docker?

BTW – the obvious answer is ‘yes, of course because it is just a container”.

But I wanted to try it out and see what differences there were.

The first main difference for me so far – remembering to run sudo when I want to elevate my permissions. This is a good thing – I did many bad things in Ubuntu that I should have thought about first – that is why sudo is a good thing for people like me…!!

So if you are thinking of running docker on CentOS and

If prompted to accept the GPG key, verify that the fingerprint matches

and if so, accept it.

To make it start every time the  Linux server

Therefore in my example above -p 56669:1433 means that port 56669 on the host (CentOS VM) is mapped to port 1433 in the container. I am not a fan of using the default port 1433  – mainly as I like to stipulate different ports for different SQL Server instances (QA vs UAT vs PROD). This means that all connection strings I create from outside the container will need to include port 56669. How do I remember this number – that’s where configuration management comes in – another blog post I think…

I also want to change the password to something more secure (and less published on the internet) and this allows me to also show you how to access the SQL tools which are built into the image:

How to use SQL Server tools in the container

Once inside the container, connect locally with sqlcmd. Note that sqlcmd is not in the path by default, so you have to specify the full path.

Once we have connected with sqlcmd we can then use our native T-SQL to change the password:

Now we can go to the Azure portal and allow access to this port:

My preference is to tie it right down to the hosts that I know will access the SQL Server instance running in this Ubuntu container on this CentOS VM hosted in Azure.

Kinda reminds me of the dream layers of the movie ‘Inception’.

In the next blog post – let’s connect to this VM using SQL Server Management Studio on our PC.